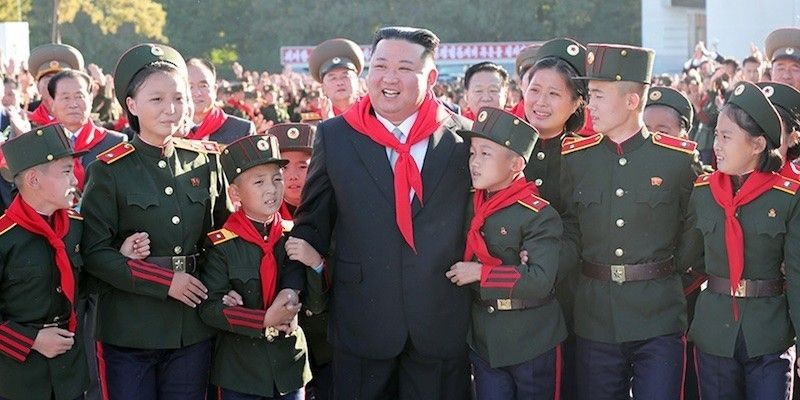 Mangyongdae Revolutionary School and Kang Pan Sok Revolutionary School have significantly marked the 75th anniversaries of their founding. They have become established as the seat for education of children of revolutionary martyrs and as the base for training the backbones of our revolution decade after decade and century after century under the care of the great Party injecting eternal vitality to the lifeline of the Juche revolution that started on Mt Paektu.

Along the course of their development associated with the noble revolutionary obligation of and outlook on the future generations of the peerlessly great men, the schools have brought up a large contingent of the indomitable revolutionaries and patriotic loyalists firmly inheriting the lineage of Mangyongdae and Paektu to promote the growth of our Party, state and revolutionary armed forces, and consolidated the cornerstone guaranteeing the eternity of the country and the revolution. This is a proud review of the long history of the schools.

The respected Comrade Kim Jong Un, general secretary of the Workers' Party of Korea and president of the State Affairs of the DPRK, attended the ceremony.

The teaching staff, students and graduates were wrapped in immense passion and excitement as they were bestowed the greatest honor of commemorating the significant founding anniversaries of their schools in the presence of the respected Marshal whom they wished to see even in a dream.

Amid the playing of the welcome music, Kim Jong Un arrived at Mangyongdae Revolutionary School, all the participants raised stormy cheers of "Hurrah!" for the great teacher and the kind-hearted Marshal leading step by step for the steady continuation of the lineage of the Juche revolution while holding the children of revolutionary martyrs in his broad bosom and looking after them with sunny love and affection.

He was greeted by senior officials of the schools.

Students of the schools presented Kim Jong Un with fragrant bouquets and put red ties around his neck.

Kim Jong Un waved back to the cheering participants, warmly congratulating the teaching staff, students and graduates of the schools on the anniversary day.

He was accompanied by Jo Yong Won, Choe Ryong Hae, Pak Jong Chon and Ri Pyong Chol, who are members of the Presidium of the Political Bureau of the WPK Central Committee.

Officials of the Party, government and military affairs who graduated from the schools attended the commemoration ceremony, together with officials, teaching staff, students and graduates of the schools.

He expressed his great trust that the revolutionary schools would take the lead as the models of teaching and education in the whole country in conformity with their important missions and basic duties as main pillars of the Juche revolution and pedigree establishments training the core backbones shouldering the sacred cause of our Party and powerfully pull the cause of Korean-style socialism in the forefront of the revolutionary ranks.

All the participants raised stormy cheers and applauded for the Marshal who provided immortal guidelines for the schools to firmly preserve and glorify their character and nature as the schools of the Workers' Party of Korea and reliably guarantee the dignity and prosperity of the eternal future of the nation and the revolution.

There was a march-past of the students of the schools commemorating their 75th founding anniversary.

Greatly satisfied and delighted to see the undaunted look full of passion of loyalty and spirit of the students of the schools ready to invariably uphold and follow our Party only and devotedly defend the revolutionary cause of Juche, Kim Jong Un raised his hands as a sign of encouragement.

He said that it is the greatest treasure which cannot be bartered for anything and utmost pride for our Party, state and people to have such house of the great revolution guaranteeing the eternal bright future of our cause, the supreme seat of educating children of the revolutionary martyrs, the second to none center in the world, and giving steady continuity to the original blood vessel of the revolution.

He asserted that it is the idea of training revolutionary reserves by the Party Central Committee to faithfully bring up the children of the revolutionary martyrs as the resolute fighters reliably carrying forward the idea, faith and tradition of loyalty possessed by the forerunners and to become hardcore members of our revolution and pioneers in the progress and development.

He had a significant photo taken with teaching staff and students of the schools, voicing his expectation and conviction that they would always cherish their origin of the children of revolutionary martyrs and perform pivotal roles in accomplishing the Party's cause, as befits true sons and daughters of the Workers' Party of Korea who are raised with the water, air and soul of Mangyongdae.

At the end of the photo session, thunderous cheers of "Hurrah!" broke out again and fireworks were displayed and chanting of "Kim Jong Un" and "devoted defence" reverberated far and wide.

The commemoration ceremony became a significant occasion that strikingly demonstrated the high enthusiasm of the successors to cherish the Marshal's boundless trust and loving care for the children of the revolutionary martyrs getting deeper day by day as the bloodline of their destinies, remain absolutely loyal to the idea and leadership of the Party Central Committee and make dedication to the overall development of the Korean-style socialism in the van of the struggle, and the continuance and invincibility of the revolutionary cause of Juche getting all the more firm despite the replacement of generations.