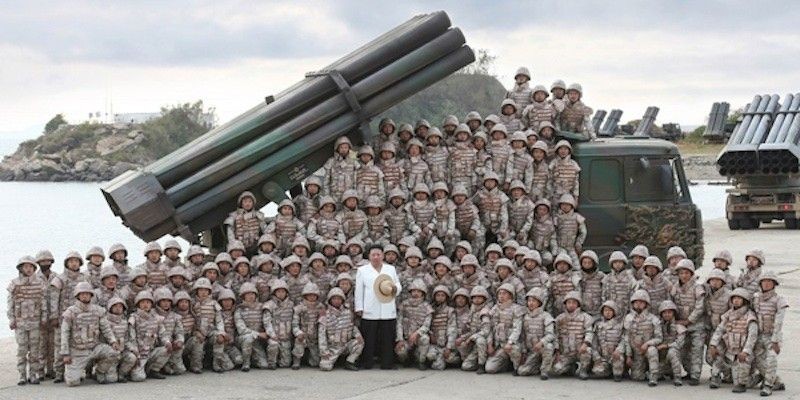 THE units of the Korean People's Army (KPA) for the operation of tactical nukes staged military drills from September 25 to October 9 in order to check and assess the war deterrent and nuclear counterattack capability of the country, which comes to be a severe warning to the enemies.

The military drills were carried out amid the ongoing dangerous military drills staged by large-scale combined naval forces, including U.S. carrier, Aegis destroyer and nuclear-powered submarine in the waters off the Korean Peninsula.

The U.S., based on an agreement to provide more intensive extended deterrence to south Korea against the DPRK's adoption of the law on the policy of state nuclear forces, brought the nuclear-powered aircraft carrier Ronald Reagan task force into the waters off the Korean Peninsula as the first demonstration on September 23 to stage joint naval drills with south Korea in the East Sea of Korea from September 26 to 29 and joint anti-submarine drills together with Japan and south Korea on September 30.

The U.S. dispatched again the nuclear carrier task force in the waters off the East Sea of Korea to stage combined missile defence exercise on October 6 and naval combined mobile exercise on Oct. 7 and 8, taking a regretful attitude further escalating the tension in the region while openly posing a military threat to the DPRK.

In this period, the so-called south Korean military chief let loose such unreasonable and provocative remarks as the "existence" of our power, baldly revealing his will for confrontation.

Under such inevitable circumstances, the Central Military Commission of the Workers' Party of Korea (WPK), after discussing the politico-military situation prevailing on the Korean Peninsula and its future in the latter half of September, decided to organize military drills under the simulation of an actual war at different levels in order to check and improve the reliability and combat power of our state war deterrence and send a strong military reaction warning to the enemies.

Kim Jong Un, general secretary of the Workers' Party of Korea and chairman of its Central Military Commission, guided the military drills on the spot.

Members of the Party Central Military Commission observed the drills.

There took place a ballistic missile launching drill under the simulation of loading tactical nuclear warheads at a silo under a reservoir in the northwestern part of the DPRK at dawn of September 25.

The drill was aimed at confirming the order of taking tactical nuclear warheads out and transporting them and of managing them in a rapid and safe way at the time of operation, checking the reliability of the overall management system, making the units acquire launching capabilities of the ballistic missile at the underwater silos and inspecting their rapid response posture.

The tactical ballistic missile flied in the air above the set target in the air of the East Sea of Korea along the appointed orbit, and the reliability of warhead exploding was clearly proved at the set altitude.

Through the drill, the orientation of building a planned silo beneath the reservoir was confirmed.

At the ballistic missile launching drill simulating the loading of tactical nuclear warheads which was staged on September 28 for the purpose of neutralizing the airports in the operation zones of south Korea, the stability of overall system related with the operation of warheads was proved. Various types of tactical ballistic missiles that were launched on September 29 and October 1 hit the set targets with the combination of air explosion and direct precision and dispersion strike, proving the accuracy and might of our weapon systems.

In order to cope with the unstable situation of the Korean peninsula, the Central Military Commission of the Workers' Party of Korea adopted a decision to send more powerful and clear warning to the enemies on October 4 and took a measure to hit the set water area in the Pacific 4 500 kilometers across the Japanese Islands with new-type ground-to-ground intermediate-range ballistic missile.

At dawn of October 6, the striking drills of super-large multiple rocket launchers and tactical ballistic missies for verifying the might of functional warheads were conducted in simulation of striking the enemies' main military command facilities, and the firing drill of the super-large multiple rocket launchers was waged in simulating the strike of the enemies' main ports at dawn of October 9.

Through seven times of launching drills of the tactical nuclear operation units, the actuality of the nuclear combat forces of our state and its militant effectiveness and actual war capabilities, which is fully ready to hit and wipe out the set objects at the intended places in the set time, were displayed to the full.

He said that he was firmly convinced that he can entrust the paramount military duty of deterring war and holding the initiative in the war to any tactical nuclear operation units through the drills for an actual war. This is the verification of the operation posture of our war deterrent and, at the same time, an occasion that proved the reliability of the thorough preparedness of the state nuclear defnece posture, and an obvious warning and clear demonstration of informing the enemies of our nuclear response posture and nuclear attack capabilities, he added.

He said that the busy military moves of the enemies are being focused at this time, too, and such the U.S. and the south Korean regime's steady, intentional and irresponsible acts of escalating the tension will only invite our greater reaction, and we are always and strictly watching the situation crisis.

Saying that the enemies have still talked about dialogue and negotiation while posing military threats to us, but we have no content for dialogue with the enemies and felt no necessity to do so, he stated that, above all, we should send a clearer signal to the enemies escalating the regional situation by involving the huge armed forces in any time with more powerful and resolute will and action.

He added that we would sharply watch the instable security circumstance on the Korean peninsula and all military moves of the enemies which cannot be overlooked and strongly take all military countermeasures if necessary.

He expressed belief and conviction that the nuclear combat forces of the DPRK would maintain their strongest nuclear response posture and further strengthen it in every way, well aware of the important duty of defending the dignity, sovereignty and right to existence of our state.