Workers’ Party of Korea and Factor of Its Invincibility 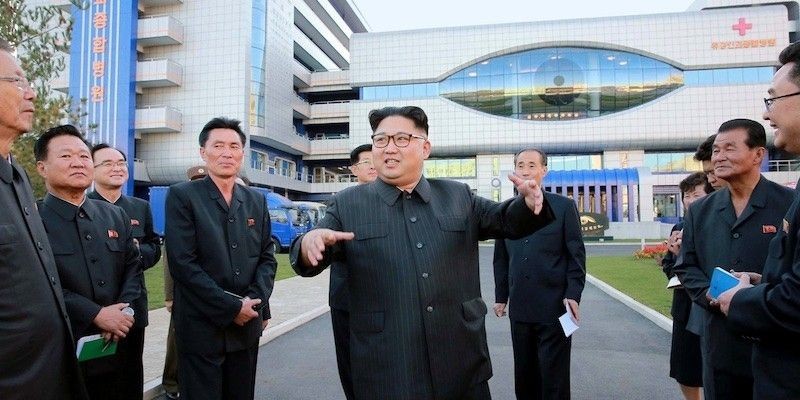 MORE than 70 years have elapsed since the Workers’ Party of Korea was founded. During the period, the Party has tided over many trials and difficulties without any slightest vacillation or frustration, demonstrating an invincible might.

Then, what is the factor of its invincibility?

The formation of the DIU was a fresh starting point and the origin of the communist movement in Korea and the Korean revolution. From this root came the programme of the Party, the principles for the Party building and activities, and the backbone for its foundation.

The WPK was different from other political parties in the mode of its foundation.

In his work The Path of the Korean Revolution published on June 30, 1930,      Kim Il Sung put forward the line of building a party as a political general staff of the revolution and pointed out that the party should be formed not by proclaiming the party central committee first but by setting up fully prepared basic party organizations and then steadily expanding them.

Accordingly, the first party organization was formed on July 3, 1930, and later he named it the Society for Rallying Comrades.

True to Kim Il Sung’s policy on party founding, a large number of party organizations were formed in different parts of Korea as well as in northeast China where the anti-Japanese revolution struggle was briskly waged.

After national liberation (August 15, 1945), he directed primary efforts to building up basic Party organizations before proclaiming the Party central committee.

As a result, Party organizations at all levels, ranging from provincial Party committee to ri Party committee, the lowest echelon, to say nothing of Party committees of the major factories and enterprises, were formed. This provided the condition to unite broad masses of the people as one and lay an organizational and ideological foundation for founding the Party.

On the basis of this preparation, on October 10, 1945, Kim Il Sung founded the Workers’ Party of Korea by admitting all the communists, who were active at home and abroad, with the anti-Japanese revolutionary fighters as the backbone.

The WPK greeted a new heyday of its development in the latter half of the 1960s under the leadership of Chairman Kim Jong Il (1942-2011). He put forward the idea of building the Party into the motherly Party and translated it into brilliant reality.

He ensured that the people-oriented policies was a consistent policy of the Party so as to help the people lead a happy life without any worries about food, clothing, education of their children and medical care. He made sure that the WPK pursued the benevolent politics with a feeling of a mother who cares more for sick and wounded children. Just as children follow their mother, so the Korean people rallied around the Party and ushered in a new phase of single-hearted unity between the Party and the masses which was yet to be known in the world.

Absolute Support from the People

The economy of the country is still faced with every manner of challenges and trials and its people cannot be said to be leading an affluent life now. However, the people are supporting the ruling WPK absolutely.

Firstly, it is because the Party shares weal and woe with the people.

In August, 2020, when Taechong-ri, Unpha County, North Hwanghae Province was hit by great flood, General Secretary Kim Jong Un of the WPK drove to the damaged area. He took measures to remove the flood damage at the earliest possible date, and had the flood victims including the elderly and children stayed at the building of the county Party committee while the officials of the county Party committee worked in makeshift tents.

He saw to it that the residents in the flooded region were provided with the aid materials by the officials of the Party Central Committee and their families and the officials went out to rural areas hit by the typhoon to help them repair the damage and take care of the people’s living.

When the malignant COVID-19 made inroads into the country this year, Kim Jong Un took every possible measure to control and manage the epidemic disease, and had medicines he had prepared with his family members sent to needy families. Also, he, in disregard of his own safety, visited pharmacies in Pyongyang and took proper measures. Officials of the Party Central Committee and other Party committees at all levels sent medicines, food grains and daily necessities to the victims.

Secondly, it is because the WPK plants the people’s demands and interests in its policies and implements them to the letter.

The Eighth Congress of the WPK held in January 2021 adopted the decision to construct 10 000 flats each year in Pyongyang so as to solve the housing problem of the citizens by building 50 000 flats in the capital city. Despite the country’s unusually difficult economic situation, Kim Jong Un strongly pushed ahead with the year’s 10 000 flats project, saying that an undertaking for the good of the people brooks no delay. In addition, he had exquisite terraced houses built on the Pothong riverside to give them to working people including meritorious and model workers, scientists, educationists and writers as a present.

Accordingly, 10 000 flats were built on Songhwa Street, 800 flats in the Pothong Riverside Terraced Houses District and thousands of flats in the Komdok area, and thus people moved into new houses.

Even when the state epidemic prevention work was switched to the highest anti-epidemic emergency level and a measure was taken to lock down every region and isolate work, production and living units from one another, Kim Jong Un made sure that projects for the people such as 10 000 flats construction in the Hwasong area in the capital city and Ryonpho Greenhouse Farm construction were carried on without letup. Thanks to his measures a bright prospect was opened to complete the projects within a scheduled period.

Kim Jong Un gave a definition that the selfless devotion for the good of the people is the mode of existence of the Workers’ Party of Korea and has devoted his all for the people. It is quite natural that the WPK enjoys absolute support from the people and demonstrates the invincible might.