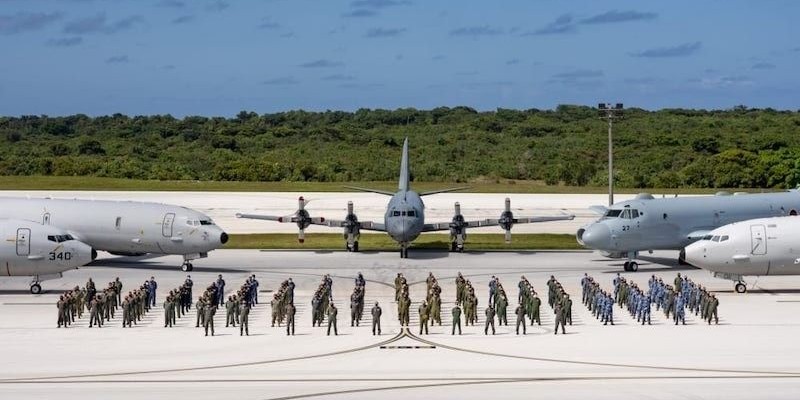 The United States tries to stage Pacific Dragon joint military exercises together with Japan, south Korea and others in Hawaii within August.

The Pacific Dragon exercises had been staged behind closed doors, in most cases, under the signboard of "mastering the ability of detecting and tracking ballistic missiles" by the U.S. with involvement of Japan and south Korea.

However, the military top brass of the U.S., Japan and south Korea held a meeting on June 11, where they decided to stage the exercises overtly and regularly to further strengthen their security cooperation. They also decided to open to the public the period and contents of this year's Pacific Dragon exercises in advance as well as the whole course of the exercises.

Moreover, the U.S. decided to conduct the U.S.-Japan-south Korea missile-warning drill, which has been staged intermittently so far, once in a quarter regularly and overtly.

This shows that the U.S. is sticking to the scheme for militarily grasping Japan and south Korea in a more undisguised and frantic manner.

The U.S. is getting hell-bent on the military cooperation with its stooges in disregard of the primary security demand and concern by Asia-pacific countries. It aims at containing the rivals such as China and Russia and gratifying the wild ambition for world domination as well as perfecting the preparations for aggression on the DPRK by realizing the U.S.-Japan-south Korea military alliance, a long-cherished desire of the U.S.

Dulles, former U.S. Secretary of State, claimed before that the separate bilateral treaties between Japan and the U.S., between Taiwan and the U.S. and between south Korea and the U.S. should be put together in any form. The fact goes to prove that the U.S. had long taken pains for the formation of the tripartite military alliance.

Such design of the U.S. has become more undisguised, occasioned by the inauguration of Kishida regime in Japan, which openly calls for increasing the defense spending and possessing the "capability to attack enemy bases", and the assumption to power of the pro-U.S. and pro-Japanese conservative forces in south Korea, which advocate the confrontation with the DPRK.

It can be proved by the recent moves of the U.S. which vociferates stronger than ever before about normal implementation of the Japan-south Korea military intelligence agreement, talking about the U.S.-Japan-south Korea security cooperation.

The scheme for formation of the U.S.-Japan-south Korea military alliance, motivated by Japan's and south Korea's kowtowing to the U.S., is evidently a dangerous prelude to the creation of "Asian version of NATO".

The U.S. moves for establishing a unilateral international order based on its value concept lead to the onset of "new Cold War" era in the Asia-pacific region and the formation of acute confrontation structure of strength for strength.

The reckless military moves of the U.S. will not escape the curse and rejection of the international community.

China and other countries in the region denounce such moves of the U.S. as an overbold demonstration of muscle and a dangerous attempt to destroy the balance of power.

The escalation of tension in the Asia-pacific region incurred by the imprudent military provocations of the U.S. will primarily have a negative impact on the situation of the Korean Peninsula.

As the U.S. specially defined the DPRK as a "major threat destabilizing the region" for no ground while mapping out Indo-pacific strategy aimed at containing China, the joint military exercises staged by the U.S., Japan and south Korea in the Asia-pacific region can be said to target the DPRK in the first instant.

Conservative media of south Korea are busy building up public opinion that the aim of the Pacific Dragon exercises is to cope with "ballistic missile threat" of the DPRK. This shows that the joint military exercises are clearly targeting the DPRK and that the U.S. hostile policy to stifle the DPRK has entered a more dangerous phase.

The reality urgently urges the DPRK to take every possible measure for bolstering up its military capability for defending the country's sovereignty and the people's well-being and awakens the countries in the Asia-pacific region.

The reckless military confrontation moves of the U.S. and its vassal forces becoming pronounced in the Asia-pacific region will only bring about catastrophic consequences of self-destruction.