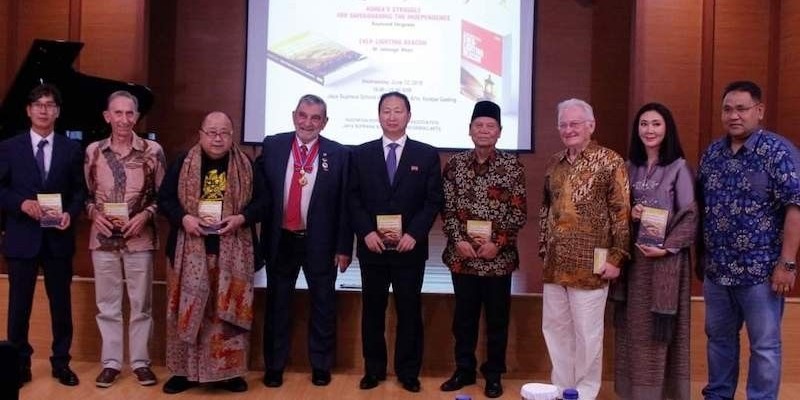 IT is with deep sadness and heartfelt pain that we report on the untimely passing away on the 9th June 2022 of our great stalwart, friend and comrade Peter Woods, National Patron of the Australia -DPRK Friendship and Cultural Society.  At the same time we extend to his loving wife Joyce, beloved daughter Rebecca and family, our sincere condolences.

As National Patron of our friendship Society. Peter was influential in broadening its base and projecting its profile and activities. Despite a continual hostile attitude and perception of the Australian Government and the main media outlets towards our friendship society and the DPRK and its people, Peter was unflinching in his efforts in promoting peace, friendship and goodwill between the Australian and Korean people and exposing the unjust and illegal sanctions that successive Australian Governments have imposed upon the DPRK  in support of US hegemonic policies.

Peter began his working life as a teacher and in a short time became an active member of the union representing fellow teachers.

He also showed a great interest in local government and in 1977 was elected as an Alderman (now Councillor) to Concord Municipal Council. As a socialist he was committed to ensuring equity, environmental sustainability and egalitarianism and that the public sector should be demonstrably more efficient than the private sector.

It was at this time Peter became involved with and committed to the International Local Government movement and in 1992 became Executive Vice President of the International Union of Local Authorities Asia Pacific.

Throughout his long and active political life Peter was a fierce fighter for the working class, a staunch defender for peace, social justice and human rights. As well as these attributes, Peter was a dedicated internationalist, and in his capacity as Ambassador - United Cities Local Government, travelled throughout the world and experienced first-hand the injustice and inequality that the people of developing nations were subjected to as a result of “big power politics.”

Part of his travels, Peter visited the Democratic People’s Republic of Korea (DPRK) in 2000 and learnt and saw for himself the injustice, difficulties and hardships that the Korean people were confronted with as a result of the unjust and illegal US sanctions. He saw first-hand that that the US division of Korea and the occupation of South Korea by its immense military force was for the sole purpose of keeping Korea divided and to maintain a war footing on the Korean peninsula.

As a result of his first visit, Peter played a leading role in organising friendship delegations from Australia and the Oceania region to visit the DPRK and travel extensively throughout the country, including the DMZ, and participating in many different international forums and conferences presenting key note speeches.

In recognition of his dedication and cause to the Korean people and their struggle for independence and reunification of their nation, Peter was elected as an executive member and Co-Chair of the Asia Pacific Regional Committee for the Peaceful Reunification of Korea (APRCPRK) and the International Festival Praise to the Great Persons of Mt Paektu (IFPGPP). Under his leadership and international experiences, the membership of both organisations within their regions have continued to grow and their activities and profiles enhanced and strengthened.

As testimony to Peter’s activities and dedication to the cause of peace, friendship, justice and equality, many letters and emails have been received from different organisations throughout the world expressing their condolences and paying tribute to Peter.

These communications have all reminded us of the dedication of Peter as a true son of the working class, a fighter for peace and justice.

For many years to come Peter will be remembered; never forgotten.